Okamotto: “The Judiciary System in Brazil is highly influenced by public opinion” 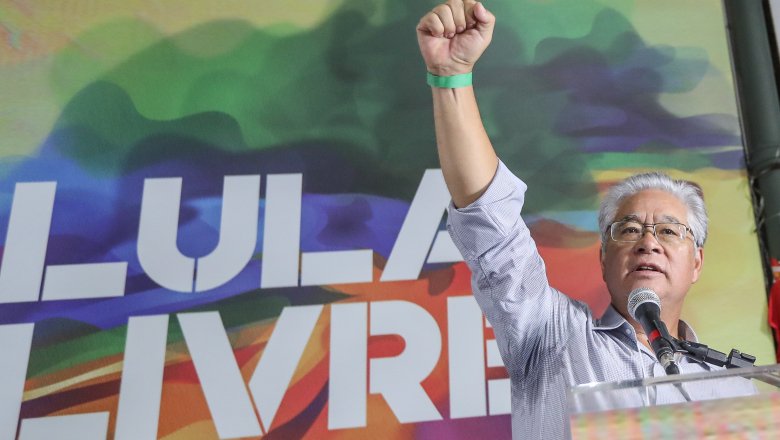 Brazilian ex president Lula da Silva has been in jail for almost two years at the Federal Police headquarters in Curitiba, after a trial full of irregularities, as revealed by the journalistic investigations by website The Intercept.

In the past week, the Judiciary Branch at Curitiba (state of Parana) attempted to transfer the ex president from his special cell to a common cell in the state of São Paulo, officially due to “the troubles” caused by the leader’s supporters outside the station. In the end, the Supreme Court overturned the decision giving room for questionings on Sergio Moro’s partiality over his trial against Lula da Silva. The Supreme court trial is going to take place in the following months.

Against this background, Resumen del Sur spoke to Paulo Okamotto – Lula Institute’s president – when he analyzes the state of affairs in Brazil and makes critics about the Judiciary branch which condemned the ex mandatary.

How do you analyze what has been happening to Lula da Silva?
Regretfully, Lula’s unjust incarceration is the result of a procedural fraud. Lula has presented evidence proving how false the accusations used by that Judiciary Branch are, that the judge and the prosecutors are lying and they were always biased against him.

However, with the investigations provided presently by The Intercept, it became clear that Lula has had an unjust trial, once the prosecutor and the judge have been working closely together in order to condemn Lula da Silva and prevent him from running Brazil’s presidential elections in 2018.

The Brazilian Judiciary system is different when compared to other countries, because the judge who passes on the sentence also studies the case and proceeds with the trial. This is problematic because the same judicial authority issues and authorizes plea sessions, provisional and other pretrial detentions, and all these are broadly repercuted by the press. Thus, it is very unlikely that a lower court judge will accept to be withdrawn from the trial.

The highest courts should review this, as, when it comes to trials broadly repercuted by the media, they join the public opinion against the defendants. We rely on the Brazilian Constitution and the streets manifestations to prevent the shaping of a negative point of view regarding Lula da Silva. This is what’s been happening in Brazil. It becomes more and more obvious every day that the Operation Lava Jato took part in a judicial farce.

Do you believe the Brazilian Supreme Court will debate Moro’s partiality over the trial against Lula da Silva?
Yes, I believe this issue will be debated. As I said before, unfortunately the Judiciary system in Brazil is highly influenced by public opinion. All the major companies are against the Workers Party and the left in general, but little by little, each day it is shown that a fraud has taken place and we hope this can influence the Court and allows us to show that left-wing and progressive governments are reliable.

Can we consider the attempted prison transference as a message of intimidation from Moro and Bolsonaro against Lula?
Of course. The attempt to transfer Lula da Silva to a common cell is a defiance to show Curitiba’s power and the power of those forces that were behind Lava Jato, against popular movements. The Brazilian Supreme Court’s overturning was a very important decision because one must abide by the Brazilian Constitution, the Code of Criminal Procedure and the law. It has been an important victory because, after all the corruption scandals and the media’s role, the politicians are demoralized.

What are Bolsonaro’s intentions on his mandate?
He intends to destroy the policies implemented by the Workers Party and prevent the State from helping those in need, creating opportunities and tackling social inequality. This government intends to apply a neoliberal model, relying on the false idea that this will attract foreign investments and create jobs.

The Bolsonaro government is not an ordinary neoliberal model, but a far-right one.

Did you manage to speak with Lula da Silva?
I spoke to him three days ago. We’ve talked about the Brazilian political and economical scenario, and also about the media and the Free Lula Campaign. He is alright, very optimistic and aware that we must go on organizing the masses.