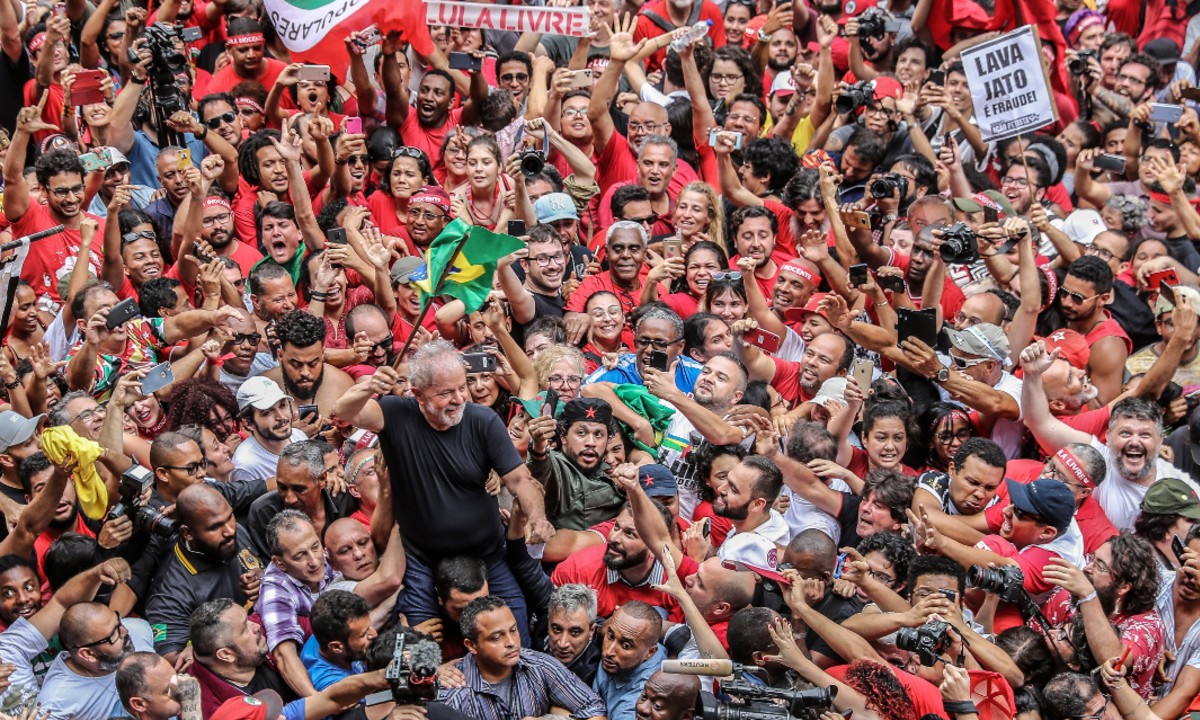 In April last year, my political opponents cheered when, after a highly partisan and biased legal process, I was sent to the southern Brazilian city of Curitiba to serve an illegitimate prison sentence.

They hoped to crush my spirit and erase me from the political map. But the experience only reinvigorated and strengthened my commitment — now I feel ready to tackle Brazil’s problems and to try to bring about a better world for the many, not just the privileged few.

The 580 days I spent in jail proved to be one of the most transformative in my political life. From my cell I was able to contemplate deeply the problems facing our society.

The toughest part of having to endure an illegal detention was being excluded from last year’s presidential election campaign. It must pain the current Brazilian president, Jair Bolsonaro, to know that he would not have beaten me in that election without the collusion of a former judge, Sergio Moro, who now serves as his justice minister.

Jurists, lawyers and scholars from across the globe were astonished by my unfair trial. Brazil even chose to ignore the U.N. Human Rights Committee’s requested that I be allowed to run as a candidate until my “appeals before the courts have been completed in fair judicial proceedings.”

As Brazil’s president I introduced wide-ranging reforms to empower federal agencies to fight organized crime and corruption. But unfortunately for our country, individuals hijacked the legal system to try to weaken and remove political opponents. An investigation known as the Car Wash Operation — headed by the “crusading” Judge Moro — became the driving force behind an effort not to prosecute corruption but to manipulate our democratic process.

The politically motivated nature of my accusers and the legal abuses committed by prosecutors could not be overlooked, and in July 2016 my team and I communicated the serious violations of my fundamental rights to the Human Rights Committee.

Throughout the judicial farce, my attorneys proved I was not guilty through overwhelming exculpatory evidence. They also highlighted the coordinated “lawfare” against me — trying to use the law to delegitimize me. With a few honorable exceptions, most of the Brazilian media chose to ignore these facts. It was only in June, with the publication of an investigation that showed collusion between the prosecution and judges by the Intercept Brazil, that the truth finally began to emerge. These revelations have rocked Brazilians and the world because they showed that a once acclaimed anti-corruption effort had been politicized, tainted and illegal.

Bolsonaro rewarded Moro when he appointed him minister. The appointment was not a surprise to me: It simply proved what my legal team and I said throughout — that Moro was biased and abused the law for his own political purposes.

Moro’s actions while presiding in the Car Wash process have done Brazil a grave disservice. He and Bolsonaro must bear the ultimate political and legal accountability. Responsibility also lies in the United States, where questions have been raised about the Justice Department’s and other law enforcement agencies’ highly irregular cooperation with Moro and the wider Car Wash investigation. Indeed, members of Congress have raised concerns, yet have received no response from President Trump’s administration.

No one should be above the law, but the law must be applied equally. I’ve never asked for special treatment, only fair, impartial and independent treatment under the law. That is why I will continue to fight vigorously to clear my name from partisan legal attacks; my recent release from captivity isn’t the end of the legal fight — it is only the beginning.

Parallel to my legal fight, I will be setting out a positive political agenda for the future of Brazil. My role is to help bring people together, as I have always done, in our increasingly fractured and polarized society. Central to my vision is to help Brazilians rebuild their trust in our political and legal institutions.

In the Brazil I aspire to help rebuild, human and legal rights — including those of my political opponents — will be protected and strengthened. It is the sign of a strong democracy when every citizen is able to take pride in and trust the strength of its institutions.

Exclusive: Bolsonaro is turning back the clock on Brazil, says Lula