Exclusive: Bolsonaro is turning back the clock on Brazil, says Lula 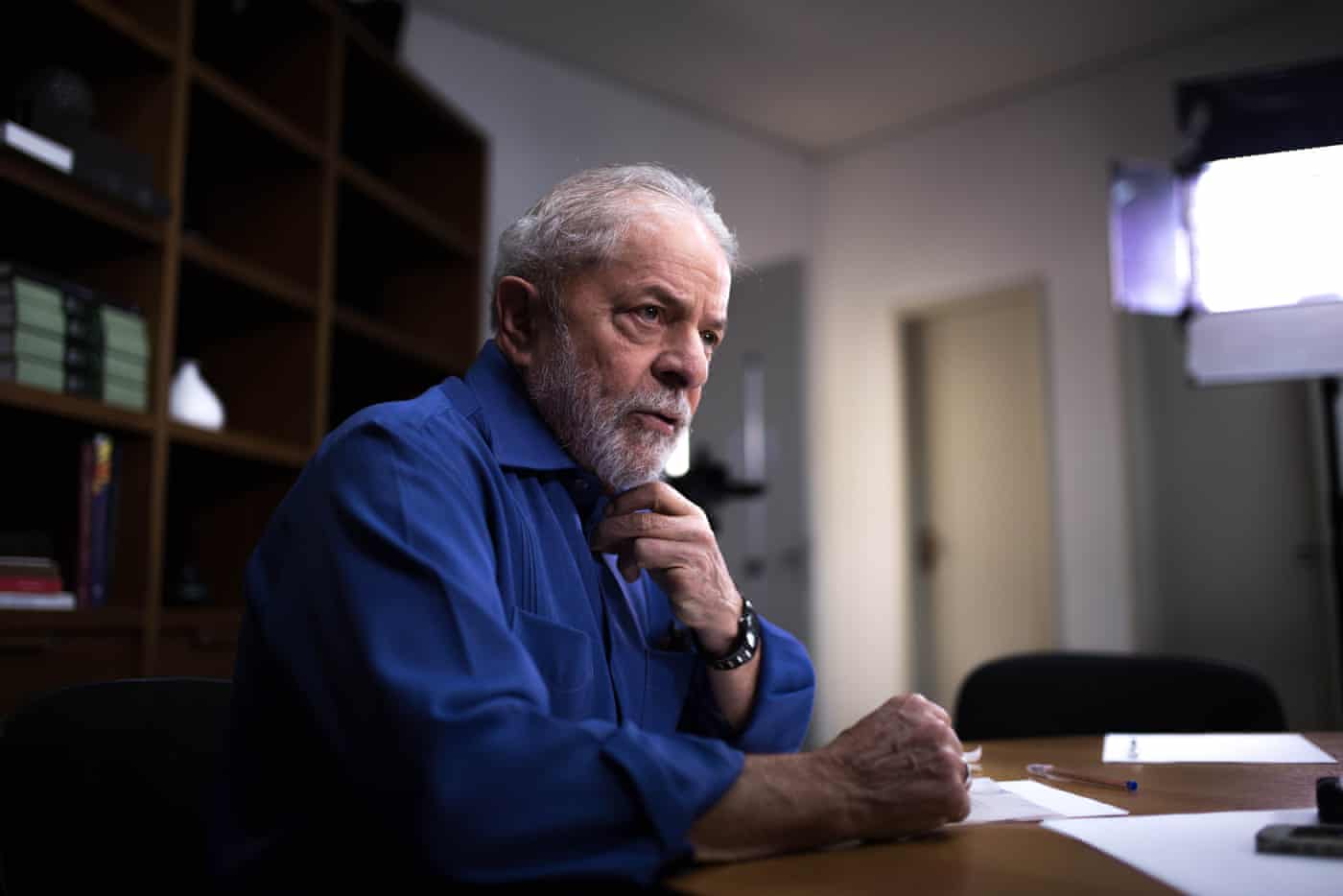 “Bolsonaro has already made clear what he wants for Brazil: he wants to destroy all of the democratic and social conquests from the last decades,” he told the Guardian.

In his first interview for a foreign newspaper since he was released from prison two weeks ago, the two-term president said his mission now was to “battle for democracy”.

“The Worker’s party is preparing to come back and govern this country!” he said, slapping the table. But Lula made no clear indication he would run for president in the country’s next general elections.

The former president of Brazil was adamant: “The Worker’s party is preparing to come back and govern this country!”

The former union leader, who was born into barefoot poverty in Brazil’s semi-arid back lands, strolled into his Worker’s party’s headquarters in São Paulo’s gritty downtown, greeting a dozen people with handshakes or kisses.

But he pulled few punches when talking about Bolsonaro – an outspoken supporter of Brazil’s military dictatorship and an admirer of Chile’s Pinochet as well as modern-day authoritarian leaders such as Hungary’s Viktor Orbán.

“Let’s hope that Bolsonaro doesn’t destroy Brazil. Let’s hope he does something good for the country … but I doubt that,” he said.

The former president expressed dismay at alleged links between Bolsonaro and organized crime.

Since the murder last year of Marielle Franco, a popular Rio de Janeiro councilwoman, several photos have emerged of the president posing with suspects in the killing, who are allegedly linked to shadowy paramilitary gangs.

And it’s not only national politics where Bolsonaro is going wrong, Lula said.

“His submission to Trump and the US … is really embarrassing” he said.

Lula’s opinion is shared by a generation of diplomats disgusted by the damage being inflicted on Brazil’s soft power status under Bolsonaro’s foreign minister, Ernesto Araújo, who believes climate change is Marxist plot.

“Brazil’s image is negative right now. We have a president who doesn’t govern, who sits discussing fake news 24 hours a day,” he said. “Brazil has to have a role on the international stage.”

Lula said he was “excited” to see left-leaning leaders back in office Argentina and in Mexico but was deeply saddened by the current crisis in Bolivia, where Evo Morales resigned under pressure amid allegations of voting fraud.

“My friend Evo made a mistake by trying for a fourth term as president,” he said. “But what they did with him was a crime. It was a coup – this is terrible for Latin America.”

Lula spent 580 days in prison on controversial corruption charges he always claimed were politically motivated to stop him from running in 2018’s elections.

“I hope one day that Moro is tried for the lies he told,” Lula said.

Lula said that he was able to survive detention thanks to dozens of supporters who camped outside the police headquarters in the city of Curitiba where he was held.

“I left prison with a bigger heart … Because of the activists I didn’t get bitter inside,” he said.

After his release, Lula addressed tens of thousands of supporters in Recife in the Workers’ party stronghold region of north-eastern Brazil. Another event this Friday in São Paulo was cancelled at the last minute due to bad weather but many more rallies are planned next year.

Lula left office in 2011 with a near 90% approval rating, having overseen a remarkable eight-year period of growth and social inclusion in one of the world’s most violent and unequal countries.

But his time in office was also tainted by a string of major corruption scandals which ensnared figures from across the political spectrum – and cleared the way for the rise of the far right.

Bolsonaro, formerly a fringe figure, swept to power amid a perfect storm of economic downturn and political crisis, after Lula was imprisoned.

“No one predicted Bolsonaro’s election – not even him,” said Lula.

The years leading up to 2018’s bitterly fought election – during which Bolsonaro was stabbed on the campaign trail by a mentally ill man – were marked by increasing polarization.

“I regret that Brazil is becoming a country where spreading hate is becoming part of people’s daily lives,” Lula said.

“I’m a Corinthians supporter. But I can’t fight with a Palmeiras fan – I have to learn to live with him,” he added, using the rivalry of two of Sao Paulo’s biggest football teams to illustrate how “people have to accept and respect each other’s differences”.

He dismissed claims that by returning to the political battleground he could further polarize the situation.

“People voted for Bolsonaro, in the main, because Lula wasn’t a candidate,” he said. “The best way to regain these people’s vote is to talk to them a lot.”

His Worker’s party, while embattled and tarnished by scandal, remains the most popular party in Brazil by quite a margin.

But it’s also the most rejected – after Bolsonaro’s former PSL party – with as many as 40% of people polled saying they would never vote for Lula’s party.

“Of course,” Lula chuckles. “But people talk more about Pelé than the other players.”

Millions of children did not starve due to Lula, says Nobel Prize