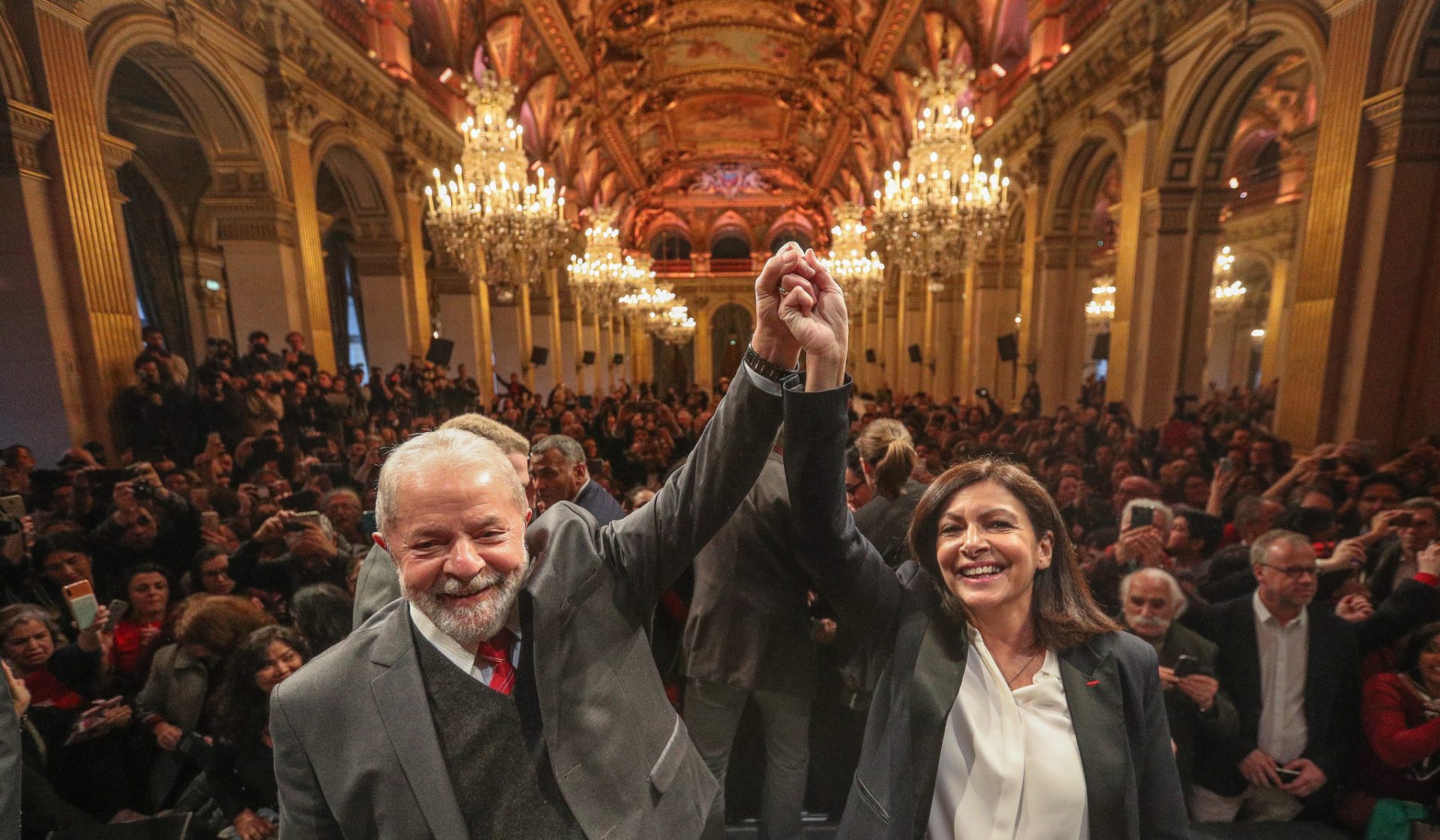 Former Brazilian president Luiz Inácio Lula da Silva received the status of Citizen of Honor for his commitment to the fight against economic and social inequalities.

In a ceremony at the City Hall of Paris, the mayor of Paris, Anne Hidalgo, awarded the decoration to the Brazilian Workers Party (PT) founder, who served 580 days in political prison, due to a judicial maneuver to prevent him from returning to power.

The Paris City Hall decided last October to award Mr. Da Silva due to the public policies adopted during his government (2003-2010) to combat inequality, which allowed some 30 million Brazilians to rise above the line of extreme poverty and access rights and essential services.

The ex-president has thanked the mayor’s recognition, who regarded him “the most Parisien among all Brazilians”

The title of Citizen of Honor of Paris is granted exceptionally for the defense of human rights, aimed at endorsing its activists, and the list of winners includes Mumia Abu-Jamal, the first to receive it in 2001 and Nelson Mandela (2013). Before Lula, Brazilian indigenous leader Raoni Metuktire was awarded in 2011.

I thank from the bottom of my heart the title granted to me by the city of Paris, through its representatives. A special thanks to the mayor, Anne Hidalgo, for the generous nominations and to the Paris City Council, which has approved it.

This title should be extended, in fact, to all men and women who defend democracy and the human rights, to all the Brazilians who fight for a better world.

Receiving this decoration is very touching to me, first of all because the city of Paris is universally known as the everlasting Human Rights symbol and upholds a standing tradition of solidarity with those who are persecuted.

And it thrills me in a special way because it has been awarded in one of the most difficult moments of our fight, when I was illegally incarcerated, a political prison which is part of a process that is not over yet.
It was a moment when we most needed the international solidarity, to denounce the injustices committed against the Brazilian people and the assaults on the Rule of Law in my country.

And the Parisien people, like in so many other occasions, provided us its fraternal protection. I remember saying, on a sympathy letter last October, that Paris was breaking through the wall of silence concealing the crimes against democracy in Brazil.

I would like to be in this libertarian city simply to celebrate the solidarity that joins us throughout History. After all, there has always been a place for Brazilians and Latin-Americans among those who fight for freedom under the shelter of Paris.

Nevertheless, it is my duty here to speak on behalf of those, in my country, who face unemployment and poverty, the abolishment of historical labour rights and the destruction of the basis of sustainable development project, capable of offering social inclusion and opportunities for all.

It is my duty to speak on behalf of the millions farmers families, the people who live near rivers and in the forests, the indigenous and the Amazon people, to denounce the intentional destruction of life-sustaining resources, as a result of the irresponsible and criminal policies pursued by a government that threatens the planet.

What is happening in Brazil is the outcome of a democratic backsliding, driven by the greed of some and also by a despicable disregard to the rights of people. This disregard is deeply rooted in the Brazilian 350-year-slavery era.

During the historically brief period in which the Workers’ Party governed Brazil, many of these rights were enforced for the first time. Among them, the fundamental right of nourishing one’s family everyday, which has been made possible due to the conjunction of Bolsa Família (cash transfer anti-poverty program) with other welfare policies, such as real wage growth and job creation policies.

We are especially proud of expanding the access to university to 4 million young people, the majority of them black, from low-income neighborhoods and the most secluded corners of our vast country. In almost all cases, they are the first ones to obtain a university degree in their families for generations.

Thousands of young people have had the opportunity to study at the world’s best universities, thanks to a student exchange program implemented during Dilma Rousseff’s government. Certainly some of them are currently in Paris.

Thirteen years under governments that put the people first were enough to start reversing this centuries-old disease called inequality in our country.

They were small steps for the dimension of the challenge, but we were in the right path because 36 million people have been lifted out of extreme poverty and Brazil out of the UN’s Hunger Map.

This process, in which we have surely made mistakes along the way, but many more achievements, has come to a stop by a parliamentary coup engineered by powerful political and economic interests and supported by their spokemen at the media and holding institutions’ key positions.

As you know, president Dilma Rousseff, an honorable woman, was ousted by the Congress without having committed any criminal offenses, following a proceeding in which technicalities concealed baseless accusations.

This first coup against the Brazilian Constitution and democracy was succeeded by the judicial farce that condemned me, as well without having committed any crimes, and by a judge who is currently the minister of the president he has helped elect, as a result of my imprisonment.

When Brazil’s Superior Electoral Court annulled my candidacy in the presidential election, in disregard of a UN decision based on international treaties ratified by the Brazilian State, we launched the candidacy of comrade Haddad for office.

He was the victim of one of the most gruesome fake news campaign on social media, illegally bankrolled and fired off by the adversary in an electoral crime we have denounced. But, almost 18 months later, it has not been addressed by a competent court.

The candidate who won those elections and is historically known for his attacks on human rights and democracy was spared by the traditional television networks of facing electoral debates against Haddad.

Therefore, these networks share responsibility for the rise to power of a fascist president in Brazil.

The unfortunate state of affairs in Brazil and our people’s suffering are the outcome of recurrent attacks on the Rule of Law, the Constitution and democracy. I am here today, temporarily released from prison and lacking political rights because last November Brazil’s Supreme Court issued a ruling recognizing, to all citizens, the presumption if innocence which has been denied to the citizen Lula, on the eve of my imprisonment.

In Europe, I want to meet and thank all of those who supported us during such hard times. But I want mostly speak with those who work to face the inequality, this disease created by the man and which is corrupting the very concept of mankind.

I want to share the successful policies we have adopted in Brazil, get acquainted with other countries’ practises and projects, and with those who study and fight against inequality worldwide.

In a recent meeting with His Holiness Pope Francis I was very excited about how enthusiastically he prompts young economists to debate and come up with resolutions to this issue, which is critical to both our present and future.

I want to propose promoting, not only the debate, but joint concrete actions to roll back inequality, to the political leaders, rulers and the civil society.

I know how international solidarity has been important in Europe, in the United States and throughout the world in order to fully restore democracy, the Rule of Law and justice to all in my country. And once more I thank on behalf of all who suffer under this state of affairs.

The Parisian people have welcomed me among their citizens, as an acknowledgement of what we have done, alongside many other comrades and counting on active social participation to decrease inequality and tackle hunger in Brazil.

I want to say my goodbyes assuring you our fight will go on, along with you all, since it is the fight for democracy, for equality, for the rights of vulnerable people, for mankind and peace.

Thank you very much.