Lula is awarded honorary citizen by the city of Paris, France 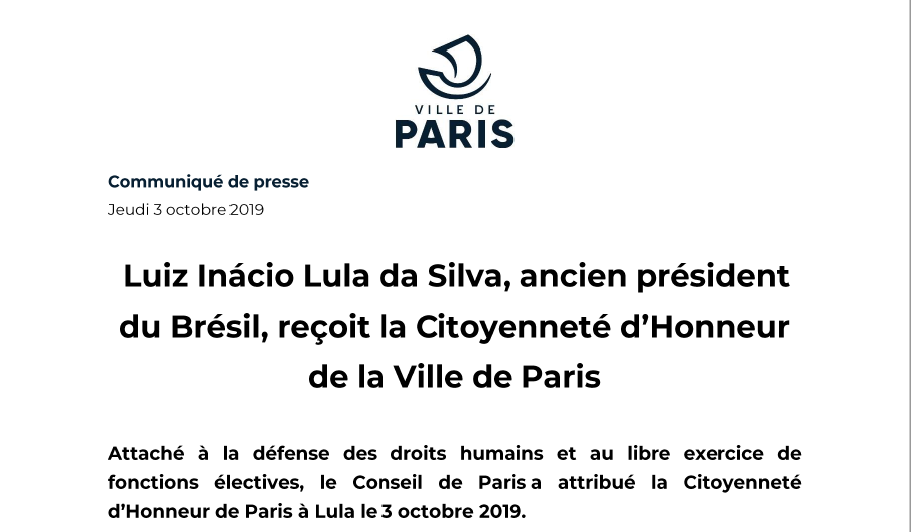 Since it started, in 2001, the award was given to 17 people in prison or in danger for its political opinions. After Nelson Mandela, Taslima Nasreen and Shirin Ebadi, Lula is now officially recognizing by the city of Paris as a political prisoner, a victim of an unfair trial. Prior to Lula, another Brazilian was awarded with the prize, Cacique Raoni in 2011.

The Conseil de Paris, Paris’ City Council, stated that Lula’s fight for Human Rights, social justice and the protection of the environment, are values highly regarded by the city of Paris and is for these that Lula is in danger. The Conseil considers that through former president Lula “all defenders of democracy in Brazil are being threatened” and “for the constant struggle of the city of Paris for human rights, we wish to give this award”. The Conseil states it’s understanding that Lula’s prison happened in a moment in which he was the frontrunner in the upcoming Brazilian elections. The document also mentions the fact that the judge responsible for Lula’s trial became the Minister of Justice for Lula’s contender, now President Jair Bolsonaro.

In commitment to the defense of human rights and to the free exercise of its elective functions, the Paris Council (equivalent to the City Council) assigned the Honorary Citizenship of Paris to Lula on October 3, 2019.

Luiz Inácio Lula da Silva, known as Lula and former president of Brazil, is currently serving an eight-year sentence and ten months in prison. Arrested on April 4, 2018 when he was a favorite with the presidential election of 2018, the conviction caused his political ineligibility and the need for a change of presidential candidate in his party.

Thus, the UN Human Rights Committee asked the Brazilian authorities to guarantee Lula’s civil and political rights, notably the one that secured his candidacy. This right was denied him, despite numerous appeals by European Heads of State, French parliamentarians and international lawyers, denouncing the inconsistency of the evidence presented by the prosecution and the conditions of Lula’s arrest.

The Intercept investigative newspaper The Intercept revealed that the judge, the convict, acted in collusion with prosecutors of the anti-corruption Lava-Jet operation to prevent Lula from appearing in the 2018 presidential election. In July 2018, a decision The court order that the former president’s imprisonment was unlawful and requested his immediate release was revoked by order of this judge.

President Lula’s commitment to reducing social and economic inequalities in Brazil has enabled nearly 30 million Brazilians to escape extreme poverty, as well as their access to basic rights and services. Lula is also known for an affirmative policy against racial discrimination, particularly noticeable in Brazil. Through the figure of the former president, all defenders of democracy in Brazil are attacked.