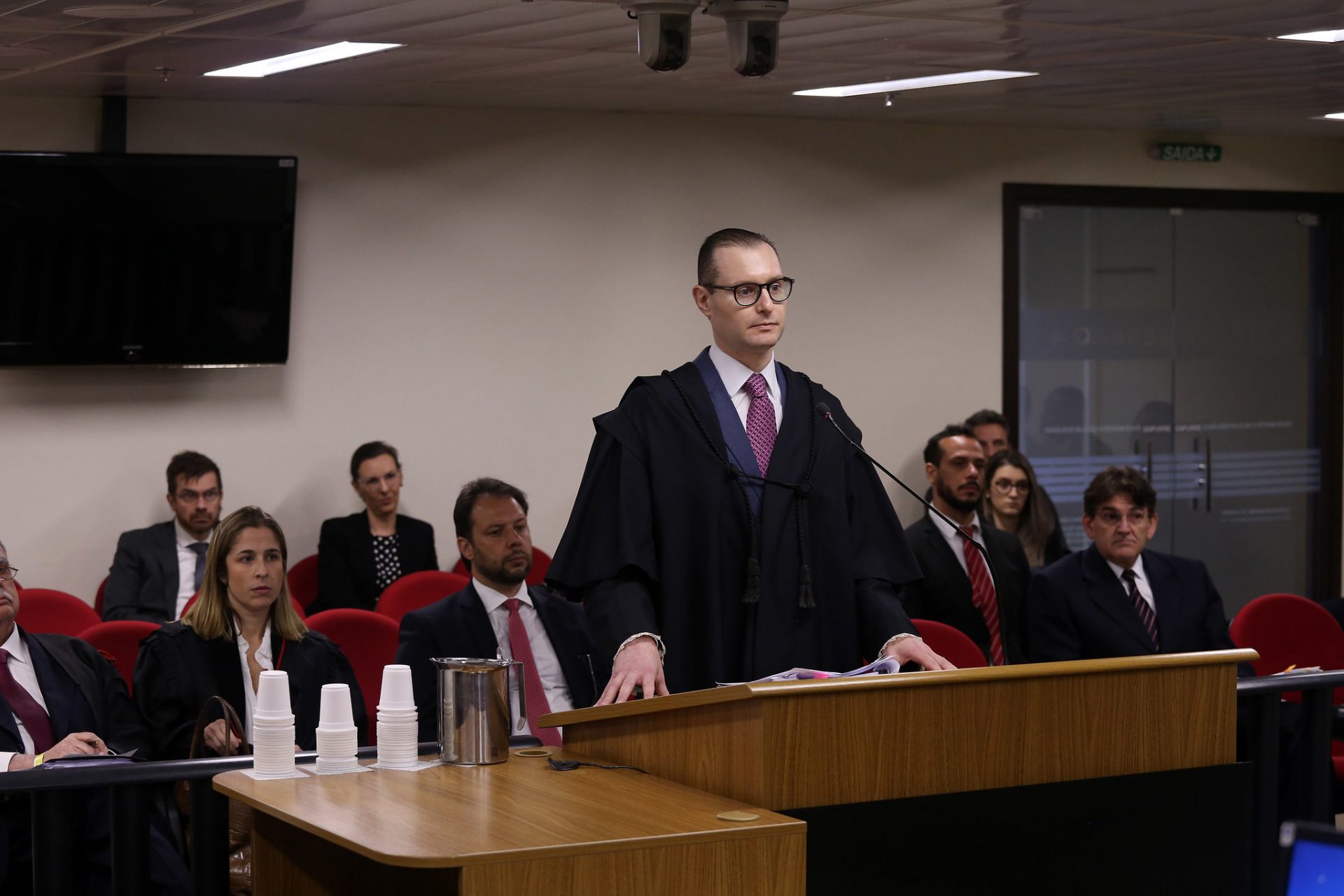 The 4th Region Federal Appellate Court [TRF4], moments before starting the trial session regarding the appeal on the “Atibaia property” case, turned into a real war scene. Heavily armed policemen came out of trucks and vehicles. Streets and nearby avenues were closed and some access barriers were lifted. In the public building, there were only judges, servants, and previously registered journalists. It is clear that there wasn’t any real threat, but the military aesthetics was needed to make it perfectly clear that the court was about to try an enemy. This is lawfare happening in a conventional scenario of war.

Right from the start, former President Lula was not given the right to see the order of appeals filed with the TRF4 observed. When the appeal tried yesterday was first filed with that court, there were another 1,941 similar appeals awaiting trial by the 8th Panel – most of them still pending examination. The trial that took place last Wednesday was scheduled exactly on the day (Nov. 08) in which we obtained a judicial decision, based on a decision of the Federal Supreme Court Full Court that allowed Lula to leave prison after 580 days of illegal incarceration. In other words, it seems like this trial was never intended to make a legal review of a wrongful judgment of conviction, but to be a reaction to the decision of the Supreme Court and to Lula’s freedom.

The synchrony between prosecution and judge unveiled by Vaza Jato could, to some extent, be noted in the processing of this appeal. On Oct. 23 the prosecutor acting before TRF4 filed a motion on the same day that Appellate Judge Gebran Neto (Judge-Rapporteur) decided that he would bring to trial on Oct. 30 only one of the several nullity claims presented in the appellate brief. At the time, he was in favor of partially annulling the case based on decisions issued by the Federal Supreme Court regarding the right of co-defendants who were informed against to present their closing arguments after informer co-defendants. But the situation has shifted. Since then Lula has left prison and the Superior Court of Justice has acknowledged the nullity that we pointed out in the format of the trial intended by TRF4. Such circumstances led the same Federal Prosecutor who had previously defended the partial nullity of the case to file a petition on Nov. 19 – that is, less than a month after the previous petition – stating that not even the partial nullity of the case should be recognized.

The opinions rendered by the Federal Appellate Judges of the TRF4 8th Panel went the same direction, making it clear, especially due to the assertiveness of the Judge-Rapporteur’s opinion, that they were in a position to challenge the understanding of the Federal Supreme Court about nullifying criminal cases in which the co-defendants who were informed against could not speak after informer co-defendants.

In fact, all the nullity claims in the appellate brief were rejected. The fact that the same Federal Supreme Court had granted us the appeal we filed as Lula’s attorneys (Pet. 6.780) to acknowledge that the allegations of former Odebrecht executives relating to the “Atibaia property” should be considered by the Federal Courts of São Paulo was ignored. Sergio Moro, who presided over the entire investigation stage, was once again fictitiously labeled as an impartial judge – as if no one in the Court knew of the politically biased acts of the then judge in order to reach his current office and of the messages revealed by Vaza Jato. In its turn, Federal Judge Gabriela Hardt’s ruling by “making use” of Moro’s judgment in the “triplex case” was praised – as if in that Court there hadn’t taken place a few days earlier a trial overruling another decision of the same judge on the grounds that there was doubt whether “there was any unlawful interception” and, furthermore, that it was allegedly unacceptable to “reproduce as their own the arguments of a third party by copying a procedural document without indicating the source.” To be clear: the “use” of Moro’s judgment was not mentioned in said judge’s decision, but it was pointed out by us, Lula’s defense, through a documentary expert report prepared by the renowned Celso Del Picchia. The case, therefore, was identical to that judged a few days ago by the same Judging Panel.

The facts that are properly recorded in the case files have been replaced by distorted narratives or readings, a real legal flatearthism. To name a few: According to the Judge-Rapporteur’s vote, Moro wiretapped Lula’s lawyers by mistake, thinking that the interception occurred at an extension of Lula’s lecture company.

The reality that is evidenced in the files is that he wiretapped the landline of our office and followed our conversations and legal strategies as they happened for 23 days – at a time when the Federal Supreme Court was deciding if Lula’s case would be led by the Federal Prosecution Service of Curitiba or Sao Paulo. According to the judge-rapporteur’s opinion, attorney Rodrigo Tacla Durán could not be heard, among other things, because his address abroad was supposedly unknown.

The reality that is clear in the files is that the Car Wash knows the address of Tacla Durán and even subpoenaed him, by means of a Letter of Request, to attend a hearing in Spain, which did not occur because the Brazilian prosecutors missed the act. According to the judge-rapporteur’s opinion, it was allegedly proven that BRL 700,000 from the “Odebrecht Structured Operations Department” was supposedly earmarked for one of the renovations carried out at the “Atibaia property.” The reality that is evidenced in the files by a technical opinion prepared by expert Claudio Wagner – who identified “follow the money” in the alleged copies of Odebrecht’s systems – is that this value was withdrawn for the benefit of one of the top executives of that business group.

On the merits, the opinions were devoted to analyzing whether renovations were carried out in the property. The problem is that if the charge is bribe solicitation (Criminal Code, Article 317), the conviction would only be possible if the judges had been able to demonstrate a direct relationship between an act that Lula could have performed within his attributions as President of the Country between 2003 and 2010 (the official act) and the receipt of an undue advantage. That is, they would have to prove the occurrence of quid pro quo. No opinion, however, evidenced the occurrence of this exchange relationship – simply because it did not exist. Despite this, they not only upheld the conviction for the aforementioned crime, but they also applied a punishment increase that requires the actual performance of an official act involved in the alleged criminal conduct (Criminal Code, Article 317, Paragraph 1).

Lula’s conviction for the money laundering crime was also upheld, although the opinions rendered did not indicate any conduct on the part of the former President to disguise the use of amounts stemming from illicit acts, nor his awareness of any use of dirty money.

On top of all these issues, the conviction handed down by TRF4 is, once again, incompatible with the very prosecution filed by the Federal Prosecutor against Lula – against which he defended himself. According to the complaint, Lula supposedly received undue advantages from 8 specific contracts signed by Petrobras, through renovations carried out at a property of which he would supposedly be the “de facto owner”. The Federal Prosecutor who was at the trial session admitted that the property does not belong to Lula. And the judge-rapporteur’s opinion, followed by the other appellate judges, acknowledged that it is not possible to identify that money stemming from Petrobras contracts was earmarked for Lula or even that there was any direct action of the former President in relation to these agreements.

All these distortions, which are linked to the very trustworthiness of the Courts System, must be corrected by the judicial hierarchy. Regardless of the appeals that will be filed specifically against the ruling issued by TRF4 yesterday, the root of all this evil lies in the lack of a fair, impartial, and independent trial for Lula, just as we pointed out in the habeas corpus application we filed regarding former Judge Sergio Moro’s suspicion, which is pending trial before the Supreme Court.

UOL | Translated by The Workers Party.