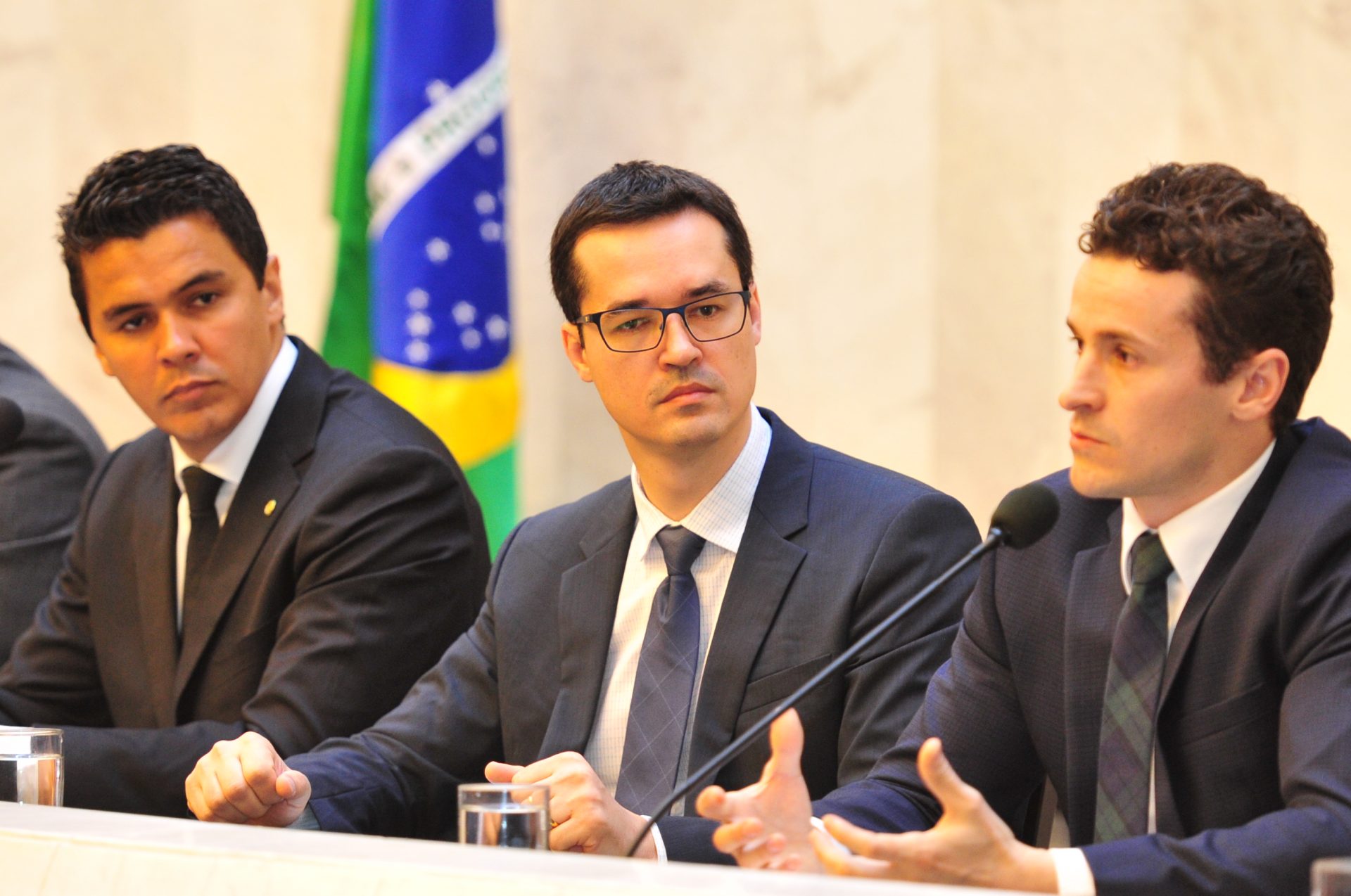 “History repeats itself, the first time as a tragedy and the second as a farce.” Karl Marx’s famous phrase gained relevance on the 14th of September, when the task force Operation Car Wash of Curitiba offered its fourth criminal action against Luiz Inácio Lula da Silva, for alleged illegal gain of values ​​given by the contractor Odebrecht, in exchange for favouring the company in public contracts.

This is because the complaint repeats the illegalities and procedural impossibilities contained in the previous ones, which is already a tragedy. But it doesn’t just mimic the illegal formula: it reproduces accusations already presented, considered and rejected by the Courts, as if there were a new fact justifying a new process.

The 121-page complaint is here. It is almost as massive as the first of the series from 2016, which had 149 pages, about the Guarujá (SP) triplex, immortalized in Deltan Dallagnol’s PowerPoint presentation. In 85 of the 121 pages, the subjects dealt with are not related to the alleged crime that is being reported: money laundering through fraudulent donations from Odebrecht to the Lula Institute.

On these pages, Car Wash attorneys repeat the entire 2016 PowerPoint content, but in an extended way. They talk about the theory that Lula was the head of a criminal scheme that defrauded public contracts to the detriment of the Union in exchange for benefits received in cash or property, for himself, allies, electoral campaigns or political party.

Whether the theory of Car Wash is supported by reality or not, the fact is that what needs to be included in a complaint in order for the Courts to accept it is something much simpler: the description of a criminal act, the attribution of its authorship to someone and evidence that the offense in question was committed by the accused referred to. This does not present a new allegation, any more than the 2016 libel accusation did.

The unquestionable lack of evidence of the complaint
Here is the crime the MPF-PR (Paraná Attorney’s Office) attempts to denounce: the Odebrecht company, between December 2013 and March 2014, made four donations, worth Reais $1 million each, to the Lula Institute. In reality, however, the accusers claim, it was not the contractor’s intention to donate these amounts ​​to the Institute. It was a bribe payment to the ex-president, disguised as a donation to his institute, in exchange for favours that Lula supposedly guaranteed to the company in public contracts, while he was President of the Republic.

At first, to accept the logic of the complaint, it is necessary to believe that Lula favoured Odebrecht while he was President but, for some reason, he accepted, in the negotiation in which he would have been involved, that the fee for his performance in the scheme was paid only four years after leaving the Presidency of the Republic.

So, according to the logic of Car Wash, between 2010 and 2014, Lula would have waited patiently until the contractor paid for the favours that had been implemented for years. On this point, there is an advantage in relation to the triplex accusation: at least the bribe would have reached Lula through his institute, and not through a property in Guarujá that he never owned or enjoyed, and that neither did the contractor who would be paying the bribe the owner, but who was only its judicial creditor.

Then, the prosecutors have to face two other facts that do not support their thesis: the first is that the donations were all made publicly and in accordance with the normative rules in force in the country, following all the accounting, tax and commercial rules in force, included in income statements, financial statements and reports to the IRS.

The second is that the amounts donated in no way differ, in scale and procedures, from many other acceptable donations of this type, made by other companies to the same Lula Institute. Nor do they differ in procedure or amounts of donations from what these same companies had already made to similar entities maintained by presidents historically, such as the Fernando Henrique Cardoso Institute or the Obama Institute, in the United States.

The matter was even considered by the Courts in a previous criminal charge presented by the same MPF-PR against the same defendants, based on another company and another donation. Hence the farce of the complaint, which tries to have something judged that has already been tried, as explained to Brasil de Fato, by the lawyer Fernando Fernandes, who represents Paulo Okamotto.

“There is no difference between these donations and others already made by Odebrecht, OAS or any company, on which the Justice has already positioned itself: they do not constitute money laundering. The matter has already been the subject of a previous action, and Paulo Okamotto has already been acquitted of the accusation. “

That is to say: in principle, nothing in the donations suggests that they were a cover-up for the crime of money laundering. At first glance, they are legal, routine and unsuspicious transactions.

Either way, the prosecutor’s office could well demonstrate the criminal spirit that would have motivated the donations, if there had been one. To do so, they would need to show clearly and certifiably:

a) What was the favour that Lula provided in exchange for the bribe disguised as a donation.

b) Why donations are not actually donations, but payment of bribes.

The task, as noted, is not easy, but it would not be impossible. Prosecutors have at their disposal a number of legal tools to determine the materiality of criminal acts. A proof could be, for example, a wiretapping at a date and time authorized by the Courts in which Lula or an adviser agrees with an executive of the contractor who he would favour in this or that contract with the Union in exchange for donations – in about four years – to his Institute.

The problem, and therein lies the repetition, is that the prosecutors again accuse Lula (and also the president of the Institute, Paulo Okamotto) without any evidence. It is hard to believe, but the complaint, made available above, is the very proof of what is being said.

Throughout the 121 pages of the MPF document, there is no evidence to support the accusatory thesis. There is no recording of a telephone interception, a text message, an e-mail exchanged, a fraudulent document, a bank deposit, a photo of exchanged bags, an apartment with millions of reais in it, a witness, nothing.

The semblance of support for the Car Wash thesis takes place through remunerated statements signed by executives and politicians who effectively confessed and were condemned for having paid or received millions in kickbacks to the detriment of the Union – in this case, Marcelo Odebrecht and Antonio Palocci.

The problem – for this and the other Lava Jato accusations against Lula – is that defendants in the courts who sign remunerated agreements are not witnesses. Their word has no value as testimonial, let alone expert or documentary, evidence.

But it is only in this way that the MPF, contrary to the law, maintains its accusation. Just like that, even though the law that creates the principle of the remunerated accusation (12,850 / 2013) is crystal clear when stating, in its 16th paragraph of Article 4:

“§ 16. No condemnatory sentence will be issued based solely on the statements of a collaborating agent.”

The reason for the existence of such a rule is evident. Were it not so, any individual who incurred a criminal act could, in order to get rid of the penal consequence of his deeds, create the stories and accusations that would be well-understood and that would interest the prosecutors, getting rid of part or all of his obligations to Justice. Therefore, an accusation is only valid if accompanied by evidence.

Even so, the Federal Public Ministry maintains the thesis that Lula, with Okamotto’s help, laundered bribe money through declared and accounted donations based solely on the pleas of confessed defendants, who obtained judicial advantages granted by the MPF, itself, to sign them.

It would be surprising if it were the first time. But it is not, it is the same expedient used by Car Wash to denounce Lula in the case of the triplex. Together with Sergio Moro and the judges of the TRF-4 (Region 4 Federal Tribunal), they obtained the condemnation on the first occasion, to the embarrassment of Brazil before the international legal community.

“This new complaint repeats the same formula as the previous ones. It is a complaint without any materiality, which tries to transform four lawful donations to the Lula Institute, documented, accounted for and declared, into disguised and illegal donations. It is another great absurdity. The only protection for this new accusation, for a change, are denunciations, especially the denunciation of Antonio Palocci.”

Lula da Silva: “I Am Thirsty For Justice”