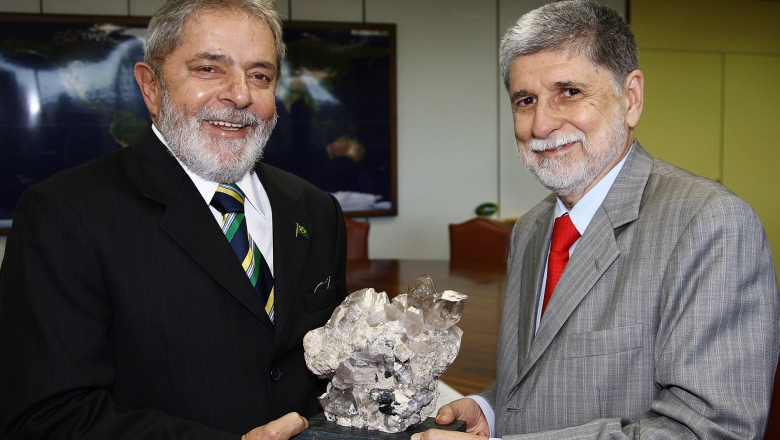 Each day I grow more worried about what is happening in our Brazil. The News I receive is about unemployment, a series of crises in schools and hospitals, the reduction and even the end of programs that that help the people, the return of hunger. I know they are giving away our country’s wealth to foreigners, destroying or privatizing what our people have built with so much sacrifice. They are betraying national sovereignty.

It is hard to keep hope in a situation such as is this one, but a Brazilian never gives up, isn’t that right? I do not lose faith in our people; this is what keeps me going in the unfair imprisonment I have been facing for over one year. I believe you remember that on April 7, 2018, when I was saying goodbye to my comrades in São Bernardo, I said I was complying with the decision of a judge, but sure that my innocence was going to be acknowledged, and sure that the farce staged to arrest me although I did not commit any crime was going to be annulled. I still believe in this.

Every day, I wake up thinking that I am closer to being released because my case is no mystery. One only has to read the evidence produced by my lawyers: the so-called triplex apartment has never been mine, either of fact or of right and that neither the construction nor the renovation involved money from contracts signed with Petrobrás. Mr. Sergio Moro himself acknowledged these facts when he had to decide on an appeal filed by my defense.

One only has to analyze the proceeding with impartiality to see that Moro was determined to convict me even before he accepted the information filed by the prosecutors. He ordered the invasion of my house to take me for compulsory interrogation without having even subpoenaed me. He ordered the wiretapping of my phone calls, of my wife’s, of my children’s and even of my lawyers’ – which is an extremely severe fact in a democracy. He conducted interrogation sessions as if he were my accuser and did not allow my defense to ask questions. He was a judge who had picked his side, the prosecution’s side.

The information against me was so fake and inconsistent that, to convict me, Moro changed the accusations the prosecutors had filed. They accused me of having received property in exchange for a favor, but, since they saw it was not mine, he convicted me saying that it had been “attributed” to me. They accused me of having performed acts to benefit a company. But there has never been one single acts, so, he convicted me of “undetermined acts.” This does not exist in our laws or in Law, only in the head of someone who wants to convict someone else by any means.

His bias was confirmed even by what he did after he convicted me and arrested me. Last July, when an appellate judge of TRF-4 [4th Circuit Regional Federal Appellate Court] ordered my release, Moro interrupted his vacations to contact another appellate judge, a friend of his, who annulled the decision. In September, he did everything he could to prevent me from giving an interview. I thought it was mere pettiness, but I understood his reasons when he released at the eve of the elections, a testimony given by Palocci that was so fake it could not even be used in the case. What Moro wanted was to harm our candidate and help his candidate.

If anyone still had any doubt about which side that judge has always been and what was his reason for persecuting me, the doubt was over when he accepted the invitation to become Bolsonaro’s Justice Minister. And the entire truth was clear: I was accused, trialed, and convicted without evidence to not be able to run in the elections. It was the only way his candidate could win.

According to the Constitution and the law, a case is null if the judge presiding over it is not impartial and independent. If the judge has a personal or political interest in a case, if he/she is friends with or enemy of the person on trial, he/she must recuse himself for the case. This is what honest judges do, but not Moro. He has always refused to recuse himself for my case, despite all the evidence that he was my political enemy.

My lawyers filed an appeal before the Federal Supreme Court so that I could finally have fair proceedings and a fair trial, which I never had with Sergio Moro presiding over my case. Many powerful people, in Brazil and even in other countries, want to prevent the said decision from being rendered, or continue to postpone it, which is the same thing for someone who is unfairly imprisoned.

Some say that if my case is annulled, all Lava Jato’s decisions will be annulled as well and this is a flat-out lie because, in the Justice System, each case is different. They also try to confuse information by saying that my case can only be decided on after an investigation about the messages between Moro and the prosecutors that are being revealed. However, we filed the said appeal last November, long before the Intercept journalists released said news. We have already produced enough evidence that the judge is not qualified and was not impartial.

All I want, my dear friend, is to see justice finally done. All I want is to have a fair trial, presided over by an impartial judge, to demonstrate with facts that I am innocent of everything they are accusing me of. U want to be trialed according to the due legal process, based on evidence, not on convictions. I want to be trialed by the laws of my country, not by newspaper headlines.

The question I ask myself every day is: why they are so afraid of the truth? I am not the only one interested in the answer – everyone hoping for justice is as well.

I’ll see you soon, my friend – on the day of the liberating truth.