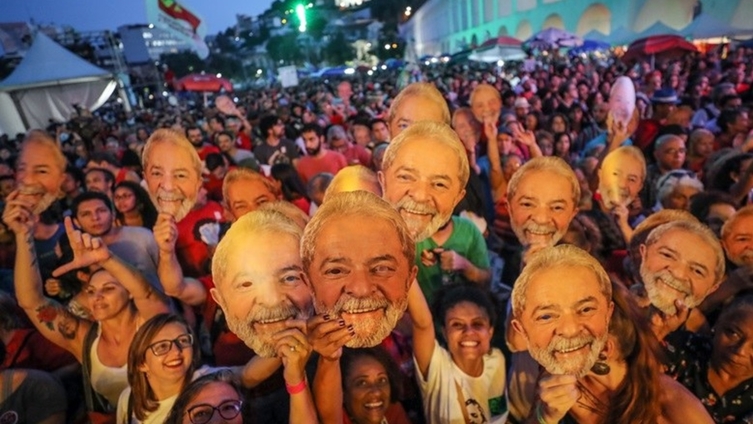 One year ago, on April the 7th, 2018, President Lula became a political prisoner. He was sent to jail by the judge Sergio Moro, who is now the currently Minister of Justice and Public Security at the Jair Bolsonaro’s administration.

Lula was accused and convicted of the alleged property of a flat in the city of Guarujá, having no proof of its ownership. He never used this private flat; nor it was at his possession and, at the time evidently belonged to a company, OAS. The prosecution of corruption against him is another aberration because according to the sentence, it is by “indeterminate facts”. But to get him out of the 2018 elections, it was worth everything.

In addition to this conviction, a big list of arbitrariness committed against Lula’s lawsuit occurred frequently and has been accumulated since 2016 in a method that reveals the full character of political harassment and legal war against the greatest political statesman and popular leader in Brazilians history. The actions against Lula also show the authoritarianism and politicization that increasingly dominates Brazilians institutions that, by the Federal Constitution, should watch over the Democratic State of Law in the country.

The conviction without proof that sends him to the imprisonment by the Judge Sérgio Moro last year was followed by a similar one, in another lawsuit called “Sítio de Atibaia” prosecute. In the alleged legal proceedings that compose his sentence, Lula is accused of being benefited by reforms in another property that he does not own in exchange for alleged acts of corruption that could not even be pointed out by his whistle-blowers.

The struggle for Lula’s freedom is a cause concerning all the democratic organisations in the world. In order to denounce Lula’s unfair imprisonment, demand his freedom and defend the maintenance of democracy in Brazil, the International Solidarity Committee in Defence of Lula and Democracy in Brazil call to action the entire international community that defends democracy and human rights – governments,
unions, social and popular organizations, collectives, activists, artists, intellectuals, religious, journalists, politicians, among others, to participate in the acts and demonstrations of solidarity of the INTERNATIONAL RALLY FOR LULA’S FREEDOM, from April 4th and 10th, 2019.

From April 4th to 10th, the International Committee of Solidarity in Defence of Lula and Democracy in Brazil is organizing the following actions:

1.Share information on the scheduled manifestations containing the
name of the act, organizers, place, date and, when possible, the link of the event created on Facebook to [email protected]

2. During the mobilizations, between April 4th and 10th, tag the pages of the Committee on Facebook, Twitter (@FreeLulaBrasil) and Instagram (Free.Lula) in photos and videos of acts posted on these social media. Afterwards, send memory, with photos of the activities, along with information such as location, time, organizations involved in the action and the release of the manifestation – as well as testimonials from participants – for posting on the official website of the Committee. The memory should be sent to the e-mail: [email protected]

3. Participate in the tweets rally on April the 7th, the day of President Lula’s political imprisonment. We will concentrate our actions between 12:00 and 3:00 pm (Brasilia’s time), using the hashtag #FreeLula. Various memes will also be available for use on tweeters, as well as cover pages for social media on the committee’s website: https://comitelulalivre.org/en/graphics/

4. Press releases: send requests to the local press (according to the attached template) asking them to discuss Lula’s case and his political imprisonment. With the barrier of the Brazilian press, the coverage of the international press has done the important work about breaking the bubble created in Brazil, spreading the truth.

5. Meetings with parliamentarians, either by inviting them to the activities or by recording supporting videos, participating in the Tweet rally, statements in their respective parliaments, public notes, etc.

Geneva | May Day of Struggle and #FreeLula

Copenhagen | May Day of Struggle and #FreeLula