Lula’s letter to those who want him silenced 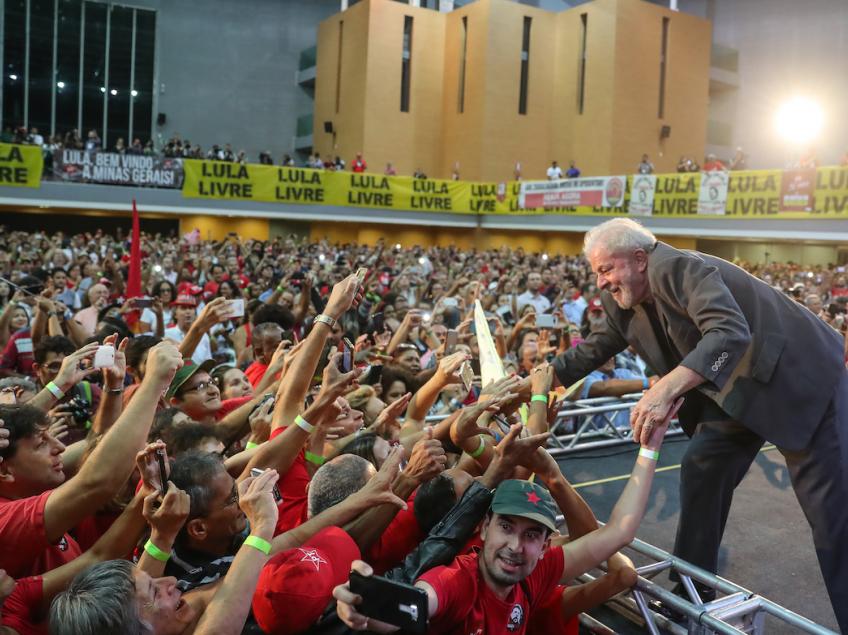 I have been in jail for more than 100 days. Outside, unemployment increases, more parents have no way to support their families, and an absurd policy of fuel prices has caused a trucker strike that has depleted Brazilian cities. The number of people burned while cooking with alcohol increases because of the high price of cooking gas for poor families. Poverty is growing, and the country’s economic prospects are getting worse every day.

Brazilian children are separated from their families in the United States, while our government humiliates itself to the U.S. vice-president. Embraer, a high-tech company built over decades, is sold for such a low price that dazes the market.

An illegitimate government rushes in its final months to liquidate as much as possible of the nation’s public assets and sovereignty – reserves of the pre-salt, gas pipelines, energy distribution companies, petrochemicals -, besides opening the Amazon for foreign troops. And as famine resurfaces and the vaccination of children plummets, part of the judiciary fights to keep its housing allowance and, who knows, gain a salary increase at the year’s end.

Last week, Judge Carolina Lebbos ruled that I can not give interviews or make recordings as a pre-candidate for the Workers’ Party, the largest in the country, which has nominated me to be its presidential candidate. It seems that arresting me wasn’t enough. They want me silenced.

And I ask of those who want me silenced: what is it that you fear? What is happening to our people? You don’t want me discussing this country’s problems? After years of slander, you don’t want me to have the right to defend myself?

This is why you — the powerful without votes and ideas — overthrew an elected president, humiliated the country internationally, and arrested me with an unproven conviction in a sentence that sent me to prison for “indeterminate acts” after four years of investigations? Because you are afraid of me speaking my mind in interviews?

This reminds me of the president of the Supreme Court saying: “silence is dead”. It reminds me of Grupo Globo, who is not worried about this impediment to the freedom of the press – on the contrary, it celebrates it.

Jurists, former heads of state from various countries of the world, and even political opponents recognize the absurdity of the process that condemned me. I may be physically in a cell, but it is those who have convicted me that are imprisoned by the lie they created. Powerful interests want to turn this absurd situation into a consummate political fact, preventing me from running in the elections, against the recommendation of the United Nations Human Rights Committee.

I have already lost three presidential contests – in 1989, 1994 and 1998 – and have always respected the results, getting ready for the next election.

I am a candidate because I did not commit any crime. I challenge those who accuse me to show evidence of what it was that I did. Why do they talk about “unspecified acts of office” instead of pointing out what I did wrong? Why speak of an apartment in Guarujá which was “assigned” instead of presenting proof of ownership? An apartment which belonged to a company and was given as a guarantee to a bank? Will they impede the course of democracy in Brazil with such absurdities?

I speak this with the same seriousness with which I told Michel Temer that he should not embark on an adventure to overthrow President Dilma Rousseff, that he would regret it. Those who do not want me to be president should be the ones more interested in me running for the elections.

Want to defeat me? Do this cleanly at the polls. Discuss proposals for the country and take responsibility, even more at this time when the Brazilian elites flirt with authoritarian proposals from people who openly defend assassination as a state policy.

Everyone knows that, as president, I exercised the dialogue. I did not seek a third term when I had a rejection rate the size of what Temer today has of approval. I worked so that social inclusion became the engine of the economy and so that all Brazilians had the right, not only on paper, to eat, to study and to have housing.

Do you want people to forget that Brazil has had better days? Do they want to prevent the Brazilian people – from whom all power emanates, according to the Constitution – from choosing who they want to vote in the October 7th elections?

What are you afraid of? The return of dialogue and national development? A time in which social conflict in this country was at its lowest? Or of when the inclusion of the poor made Brazilian companies grows?

Brazil must restore its democracy and free itself from the hatred cultivated to take down the Workers Party government while withdrawing rights from workers, bringing back the unbridled exploitation of the poorest. Brazil needs to find itself again and regain its happiness.

You can arrest me. You can seek to silence me. But I will not change my faith in the Brazilian people, in the hope of millions to have a better future. I am sure that the faith in ourselves, in opposition to an underdog complex, is the solution to the crisis we are living in.