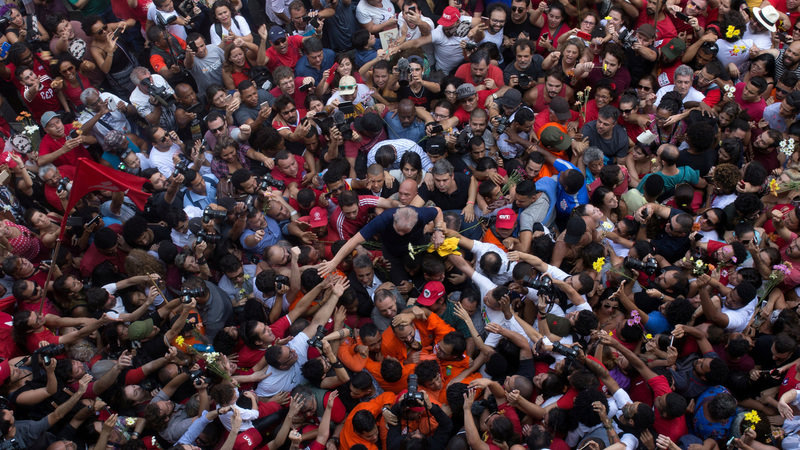 We hereby manifest our deep concern about the circumstances under which the former Brazilian president Lula da Silva was tried and imprisoned. There is abundant evidence that Lula da Silva was a victim of lawfare, that is, the abuse of judicial power for political purposes. Hence, the international community should consider and treat him as a political prisoner.

Lula’s trial was conducted as part of the so-called Operation Car Wash, an investigation of the payment of procurement kickbacks to Petrobras officials and politicians, some of which took place while Lula was president. While critics claim that “Lula should have known” or “Lula must have gained something,” there is no evidence of his participation in the kickbacks. According to Brazilian laws and legal doctrines, corruption is a quid pro quo transaction. To convict Lula for corruption, the prosecution should prove that he had participated in the procurement frauds and that he had been compensated for such illicit acts.

In 2016, Lula was accused of receiving a rather modest apartment from OAS, one of the Petrobras contractors involved in the corruption scheme. However, no wiretapped conversations, bank transactions, transfer of funds or title deeds have ever substantiated the case against Lula. He never used or profited from the apartment. Worse still, it later emerged that the same apartment had already been used as collateral by OAS in a long-term loan transaction when the accusation was made that Lula was the owner.

The lack of incriminating evidence was disregarded by Sergio Moro, the judge responsible for the case against Lula. Moro based his decision on the “informal collaboration” (not even a formal plea bargain) that offered a substantial reduction of jail time if Lula’s codefendant pleaded guilty and produced incriminating evidence against Lula. The co-defendant was Leo Pinheiro, OAS’s owner. Pinheiro had already been sentenced to 26 years when he decided to “collaborate” and implicate Lula. He stated that the apartment was “meant to be given” to Lula, an accusation which contradicted 73 other depositions. But his statement was considered enough for Justice Moro to convict Lula da Silva. Pinheiro’s sentence, in turn, was reduced to three years, and he was released from prison during the day.

Besides failing to prove Lula’s ownership of the apartment, the Prosecution could not point to any specific action or omission that Lula had undertaken to benefit OAS. Lula had been accused of benefiting the co-defendant with three procurement contracts with Petrobras. After months of investigations, no material proof was found. Moro then convicted Lula for performing “indeterminable acts of corruption” that benefited OAS. This categorization shifts the burden of proof and the presumption of innocence and does not exist in the Brazilian legal system.

Inadvertently, Judge Moro himself admitted that he lacked jurisdiction over Lula’s case. When deciding a motion filed by the defense, he declared that he had “never affirmed, not would be required to prove, that the money used to build the apartment allegedly given to Lula originated from contracts between OAS and Petrobras.” If the case has no relationship with the Petrobras corruption, it should not have been reviewed by Moro.

Simply put, Lula’s process was one in which the trial magistrate chose his defendant and, acting as the investigator, prosecutor, and judge, convicted him of having committed “undetermined official acts of corruption.” Such a sentence, by its very wording, is legally and constitutionally unsustainable, including by Brazilian standards, given the reference to undetermined. A sentence referring to undetermined crimes fails all logic and reasonable legal scrutiny and is thoroughly Kafkaesque. Moreover, the reference to official acts is unreal, since the unfounded accusations motivating Moro’s sentence refer to a narrative beginning in 2013, well after Lula was out of office.

The lawfare against Lula also included tactics to keep his case under Moro’s purview at all costs. In March 2016, Moro leaked illegally obtained wiretaps of the sitting president, Dilma Rousseff, regarding Lula’s appointment as Chief of Staff in her administration. He claimed, again without proof, that this appointment was meant to “obstruct justice,” since once appointed to the administration Lula would be judged by the Supreme Federal Court (STF) and not by Moro himself. Although Moro´s impartiality was questioned, the Federal Regional Court for the 4th Circuit (TRF – 4), the next tribunal to review Lula’s case in the hierarchy of the Brazilian judiciary, ruled that Operation Car Wash was “exceptional” and that “ordinary rules don’t apply.”

The Kafkaesque nature of Lula’s trial was reinforced when, in August 2017, the presiding justice of the TRF-4 declared that Moro’s sentence against Lula was “technically irreproachable,” while admitting that he had not even read the case. Meanwhile, his chief of staff posted a petition requesting Lula da Silva’s imprisonment on her Facebook page.

TRF-4 rushed its decision. The review of Moro’s sentence against Lula was placed ahead of 257 other cases that were pending. The reporting judge for TRF-4 took only six days to issue his findings for a case with literally thousands of pages of transcripts and hours of depositions. The TRF-4 panel took 196 days to decide. On average, it takes 473 days for similar cases. The TRF-4 also ordered Lula’s immediate arrest. Only 3 of the other 20 Car Wash defendants whose appeals were denied were sent to jail, and the incarcerations were implemented months after the decision.

Lula petitioned the Supreme Federal Court (STF), requesting a habeas corpus order against his immediate imprisonment because he still had the right to file appeals. According to the Brazilian Constitution, “no one can be deemed guilty until his or her last appeal has been decided.” Given this constitutional doctrine in Brazilian justice, it is important to note the following: the merits of Moro’s sentence against Lula, sustained and exacerbated by the TRF- 4 (extending imprisonment from 9 to 12 years), still have not been reviewed by the higher courts in the Brazilian judiciary system, including the STJ (Supreme Court of Justice) and the STF, the highest court in the country for constitutional questions.

In a tie-breaking vote denying the habeas corpus petition, a STF Justice declared that she would have voted otherwise if the Court had reviewed the constitutional doctrine in general, instead of its specific application to Lula’s case. The day before the vote, the Army’s Chief Commander tweeted out a message to the Court, saying that “the Army will not tolerate impunity.” For this thinly veiled threat, he got not a reprimand, but a “like” from the Twitter account of the very same TRF-4 that had confirmed Lula’s conviction.

The following morning, the judge presiding over the TRF-4 predicted that Lula’s detention could not occur in less than a month’s time, given all the legal proceedings still pending before the tribunal. In the afternoon, however, the TRF-4 requested Moro to order his arrest. It took Moro nineteen minutes to issue a decision that acknowledged that Lula still had the legal right to have another motion heard by the TRF-4, while declaring that this right to appeal was a “procrastinating pathology” that should be “wiped out of Brazilian laws.”

It should come as no surprise that a recent poll showed that 55% of the Brazilian respondents agree that “Lula is being persecuted by the Judiciary,” and 73% agree with the statement that “the powerful want him out of the elections” in which he still is the favorite candidate by far.

The abuses of judicial power over Lula da Silva are thinly disguised political persecution under a legal cover. Lula da Silva is a political prisoner. His detention tarnishes Brazilian democracy. The supporters of democracy and social justice in the East and the West, in the North and the Global South, should join in a worldwide movement to demand Lula da Silva’s release.