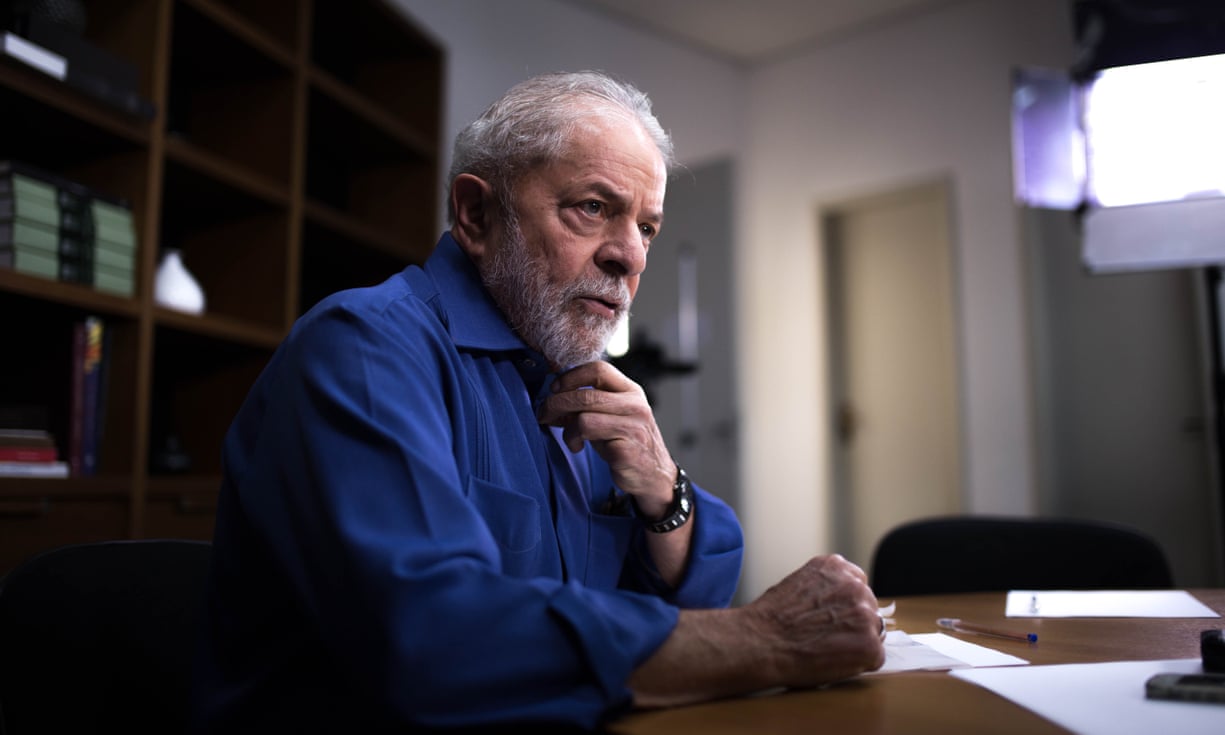 Jair Bolsonaro is leading Brazilians “to the slaughterhouse” with his irresponsible handling of coronavirus, the country’s former president Luiz Inácio Lula da Silva has said.

In an impassioned interview with the Guardian – which came as Brazil’s Covid-19 death toll hit 1,924 – Lula said that by undermining social distancing and defenestrating his own health minister, Brazil’s “troglodyte” leader risked repeating the devastating scenes playing out in Ecuador where families have had to dump their loved ones’ corpses in the streets.

“Unfortunately I fear Brazil is going to suffer a great deal because of Bolsonaro’s recklessness … I fear that if this grows Brazil could see some cases like those horrific, monstrous images we saw in Guayaquil,” said the 74-year-old leftist.

“We can’t just want to topple a president because we don’t like him,” Lula admitted. “[But] if Bolsonaro continues to commit crimes of responsibility … [and] trying to lead society to the slaughterhouse – which is what he is doing – I think the institutions will need to find a way of sorting Bolsonaro out. And that will mean you’ll need to have an impeachment.”

Bolsonaro – a proudly homophobic former army captain already despised by progressive Brazilians for his hostility to the environment, indigenous rights and the arts, as well as his alleged links to Rio’s mafia – has alienated millions more with his dismissive stance towards the coronavirus, which he belittles as media “hysteria” and a “bit of a cold”.

Since the World Health Organization declared the pandemic on 11 March, Brazil’s president has repeatedly thumbed his nose at social distancing, first by egging on and attending pro-Bolsonaro protests and then with a series of provocative visits to bakeries, supermarkets and pharmacies. During one unnecessary outing Bolsonaro declared: “No one will hinder my right to come and go.”

In March the rightwing populist even suggested Brazilians need not worry about Covid-19 since they could bathe in excrement “and nothing happens”.

Such moves put Bolsonaro at loggerheads with his own health minister, Luiz Henrique Mandetta, a doctor-turned-politician who was fired on Thursday after challenging the president’s behaviour.

Meanwhile Bolsonaro’s politician son, Eduardo, has taken the wrecking ball to ties with Brazil’s most important trade partner, China, by accusing its Communist party leaders of being to blame for the coronavirus crisis.

Bolsonaro’s actions have sparked nightly pot-banging protests in cities up and down the country and drawn scorn from across the political spectrum.

“Coronavirus must be laughing its head off,” Eliane Cantanhêde, a columnist for the conservative Estado de São Paulo newspaper, wrote of Bolsonaro’s antics this week.

The rightwing governor of Brazil’s most populous state, São Paulo, has declared the country at war with both the coronavirus and the “Bolsonaro-virus”.

Lula, who governed from 2003 until 2010, claimed that Bolsonaro’s “grotesque” actions were endangering lives by ignoring distancing guidelines put in place by Brazil’s own health ministry.

“It’s natural that a portion of society doesn’t understand the need to stay at home or how serious this is – especially when the president of the republic is a troglodyte who says it’s just a little flu,” Lula said by video call from the Brazilian city of São Bernardo do Campo, where he is in self-isolation after returning from a tour of Europe.

“The truth is Bolsonaro doesn’t think about the impact his destructive acts have on society. He’s reckless.”

Bolsonaro says his opposition to distancing stems from his desire to protect Brazil’s most vulnerable citizens and their jobs.

After sacking his health minister, Bolsonaro claimed to be fighting for “the long-suffering Brazilian people” and warned coronavirus threatened to become “a veritable meat grinder of jobs”.

“At no point has the government abandoned the neediest … The impoverished masses cannot stay stuck up at home,” Bolsonaro said. “I know … life is priceless. But the economy and jobs must return to normal.”

Lula, who was born into rural poverty and won international plaudits for his fight against hunger, scoffed at the idea Bolsonaro was a champion of the poor.

“Bolsonaro is only interested in himself, his kids, some pretty conservative generals and his paramilitary friends,” he claimed, in reference to longstanding allegations over the Brazilian president’s family ties to the Rio de Janeiro mafia.

“He doesn’t speak to society. Bolsonaro doesn’t have ears to listen. He just has a mouth to talk nonsense.”

While Brazil’s former president claimed impeachment was an option, he conceded there was not currently support for that in the country’s congress, as there was when his leftwing successor Dilma Rousseff was removed from office in 2016.

He said many rightwing politicians thought it wiser to allow Bolsonaro to continue sabotaging his chances of re-election in 2022 through his own incompetence – before electing another president from the right.

Lula, who was sidelined from 2018’s election after being jailed on disputed corruption charges, signalled he would not be the leftwing candidate in that contest.

“I’ve lost my political rights so I’m not talking about myself,” said Lula, who was released in November 2019 from 580 days in prison after a supreme court ruling.

Observers of Brazilian politics are less sure Bolsonaro is totally finished – or that the left is well positioned to replace him.

Some believe Bolsonaro – one of just four world leaders still downplaying coronavirus alongside the authoritarian presidents of Nicaragua, Belarus and Turkmenistan – has obliterated his chances of a second term with his response to the crisis.

But Thomas Traumann, a political commentator and communications minister under Rousseff, said such certainty was premature: “There are two centuries to go until 2022.”

Traumann said it was clear Bolsonaro had severely weakened himself – but so far rightwing politicians such as the governors of Rio de Janeiro and São Paulo appeared to be capitalising on Bolsonaro’s blunders the most.

And ultimately Brazil was hurtling into such an unpredictable and potentially tumultuous few weeks that it was impossible to know what the political fallout might be.

“We know Bolsonaro will come out of this weaker. We know his mistakes will not be forgiven,” Traumann said.

How the political chips would fall after that was anyone’s guess, Traumman added, likening Brazil’s predicament to the start of a rollercoaster ride.

“All we know is that many loops lie ahead … We are moving into an unknown world … We are sailing in the darkness.”

Lula said he was certain of one thing: that at a moment of national crisis, Brazil needed a leader capable of uniting its 211 million citizens.

“A president should be like the conductor of an orchestra,” he said. “The problem is that our conductor knows nothing about music, can’t read a score and doesn’t even know how the batons work.

“He’s trying to play classical music with the instruments you use to play samba. He’s turned his orchestra into a madness – a Tower of Babel,” Lula said. “He doesn’t know what he’s doing in the presidential palace … Not even Trump takes him seriously.”