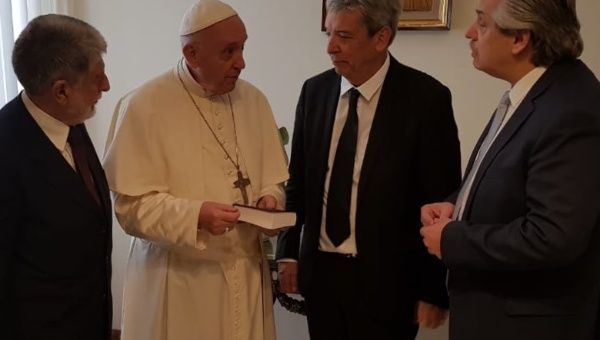 The group was afforded roughly an hour with Pope Francis to make their case in favor of Lula’s release and his presidential candidacy for the upcoming October general elections.

Amorim presented Pope Francis with the Italian translation of the recently published book “The Truth Will Prevail: The People Know Why I Was Condemned,” which addresses the lawfare and judicial manipulation behind Lula’s imprisonment. For his part, Pope Francis sent the former head of state a spiritual message, according to Jornalistas Livres.

“The main subject discussed was president Lula’s situation,” Amorim said of his meeting with Pope Francis. “He (the Pope) is interested and concern (Lula’s imprisonment)… This has been a constant concern of the Pope, and he wanted to listen to, with much interest, the entire situation (and) how it happened in Brazil (and its) political evolution.”

Next week Supreme Court Judge Edson Fachin will review another appeal presented by Lula’s legal defense team to release the former head of state from prison. According to Brazil’s Constitution, Lula has the right to continue to appeal his case in freedom until those appeals run out, which they have not.

Despite his conviction and imprisonment for corruption, events that many legal experts and observers attribute to lawfare and a salacious mainstream media campaign, Lula has topped every 2018 electoral poll conducted by Vox Populi, Ibope, Datafolha, Data Poder 360, Instituto Parana, the National Confederation of Transportation/MDA and Ipsos.

Lula’s two terms in office were marked by a slew of social programs, lifting millions of Brazilians out of poverty and removing the country from the United Nations World Hunger Map. He left office with a record approval rating of 83 percent in 2011, according to Datafolha.