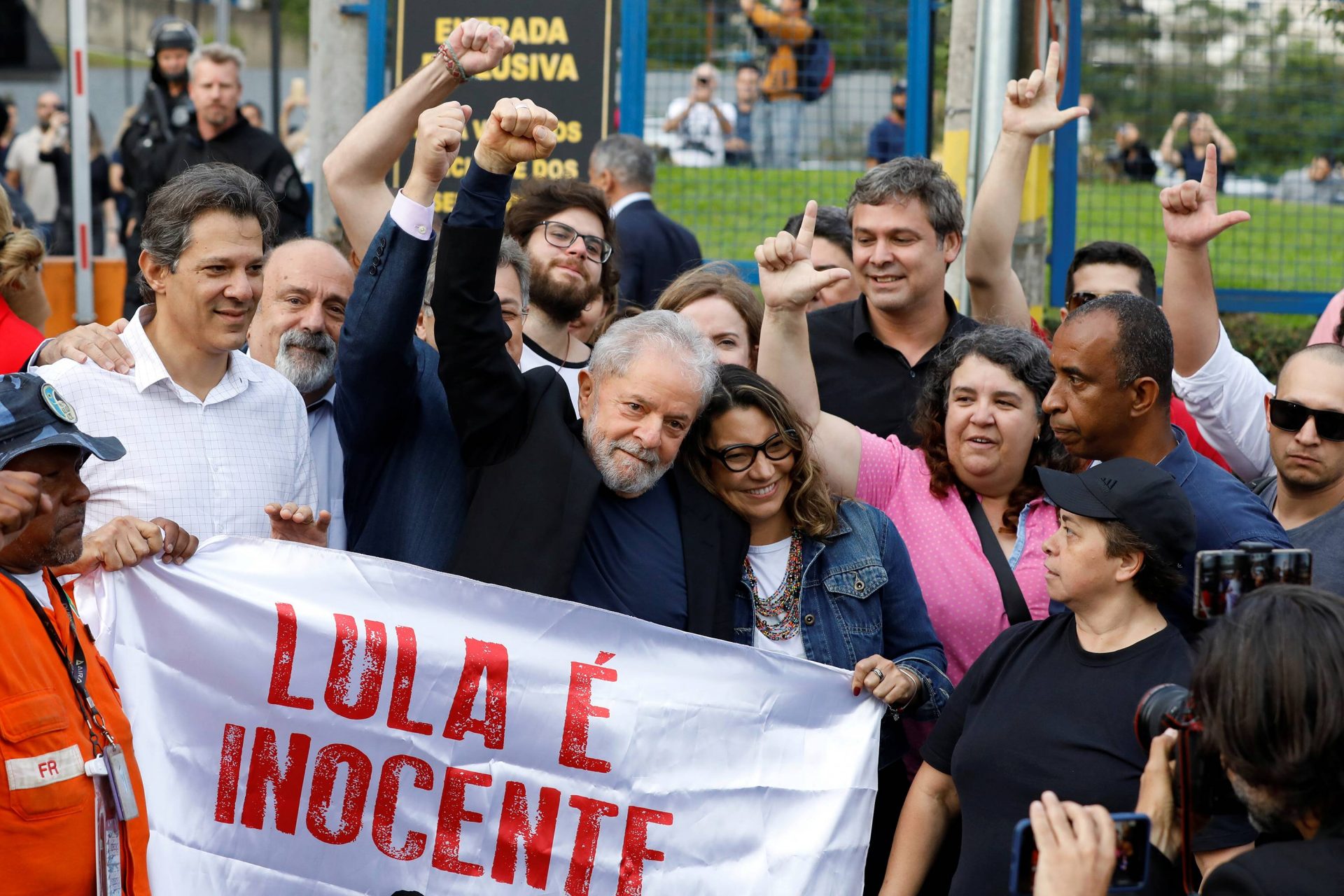 For the first time in five years, former president Lula da Silva’s political and legal entourage observes a favorable scenario over the judicial plot involving the leftist politician. Allies are even talking about a “perfect storm”. The former president’s representatives and lawyers interviewed by CartaCapital detailed five legal facts considered positive, besides the scenario changes which affected the mood of those who defend the annulment of the former president’s proceedings.

Among them, the arrival of “Bolsonaro’s minister” Kassio Nunes Marques to the Second Panel of the Supreme Court, the great defeat of Sergio Moro in the same court on the case Banestado, and the seven proceedings archived. All of them form the background for the most decisive trial expected for 2021, the habeas corpus concerning Sergio Moro’s partiality in the sentence he passed on the Guarujá triplex case.

Minister Gilmar Mendes has recently stated that he intends to include the habeas corpus’ analysis on the Second Panel of the Supreme Court’s schedule in February. A favorable decision towards Lula da Silva would lead to the annulment of the sentence, the proceeding’s starting over in a court of the first instance, and the reestablishment of Lula da Silva’s political rights, which would restore him to the 2022 presidential elections.

The trial within the court’s Second Panel began in 2018 and has got two votes against Moro’s partiality, those of the ministers Cármem Lúcia and Luiz Edson Fachin. Besides Mendes, Ricardo Lewandowski, and Kassio Nunes are yet to vote. “For this year, the most anticipated unfolding is this habeas corpus. The matter has legal priority: Lula da Silva is over 60 years old, it is a case which had the judgment on the merits initiated and the habeas corpus, by nature, is an expedited proceeding”, lists Cristiano Zanin, former president’s lawyer.

Moreover, Lula da Silva’s defense team will have granted access to the full extent of the messaging archives seized by Spoofing Operation on the following days. Those are seven terabytes of messages between the prosecutors of Lava Jato Operation, Sergio Moro, and Deltan Dallagnol, which were under Justice’s responsibility since the imprisonment of the men who hacked the Telegram of the people mentioned above. The material disclosed by The Intercept Brasil not only showed the task force in Curitiba had been partial towards Lula da Silva but also the many crimes committed by those who called themselves ‘fighters against corruption’. After minister Lewandowski issued three orders and a subpoena, since the judge on duty had refused to abide by the Supreme Court’s ruling, the magistrate Gabriel Zago Capanema Vianna de Paiva from the 10th Regional Federal Court of Brasília, authorized the defense team access to the archives.

According to a lawyer who had access to some parts of the chats, they even revealed the illegal relations between the former judge and Lava Jato Operation prosecutors and US authorities. There was then a synergy on the outskirts of the international cooperation agreement signed between both countries, which demands the partnership to be led by the DRCI, a Ministry of Justice division. There are no official records of these encounters. Thus, the proceedings which used information sent by the Americans must get annulled”, the source explains.

The defense’s strategy is to combine these conversations with evidence, reports, and testimonials filed in the proceedings.

It is important to remember that, after conducting an official investigation, the Federal Police ensured the integrity of the conversations obtained by the hackers.

Interestingly enough, Nunes Marques’ appointment in the Supreme Court has been one more change that might translate into a positive effect on Lula da Silva’s current state of affairs. And it was on Jair Bolsonaro. In October, the former captain appointed him as a replacement of Celso de Mello, the then judge of the Regional Federal Court of the First Region. Mostly due to the magistrate’s “law-abiding” beliefs. Bolsonaro sought someone capable of softening occasional analysis in court on the accusations against his son, senator Flávio Bolsonaro, within the “rachadinhas” scandal.

Since the law is for everyone, Lula da Silva’s allies expect a favorable position regarding the defense’s demands from the new minister. These are no vain hopes. On December 11th, Nunes Marques voted in favor of Lula da Silva to exclude former minister Antonio Palocci’s plea bargain from a Lava Jato’s proceeding. The Second Panel then concluded that Moro acted with partiality when he lifted the plea bargain’s secrecy and included it in the proceeding six days previous to the 2018 elections.

A lawyer who preferred to remain anonymous was categorical: “The minister would have to make a total bootleg turn to change his law-abiding position and surprise someone. He has arrived in the Second Panel in line with Gilmar, and the greatest example of it was the trial on Palocci’s plea bargain”.

The plea bargain trial was not only marked by the new minister’s vote. Cármem Lúcia also surprised Lula da Silva’s allies and defense when she voted in favor of the former president and maintained the exclusion. The minister’s “change of attitude” might be related to the Vaza Jato (Leak Express) scandal. Not only judge Cármem Lúcia but most of the national and international legal community have admitted, for the first time, the evidence of the lawfare practiced by the task force in Curitiba and the former judge and minister.

Moro has long ceased to be a national hero and now face the consequences of it. In addition to having suffered defeats in Palocci’s plea bargain proceedings twice, the Second Panel of the Supreme Court annulled his sentence regarding the Banestado case on August 25th, alleging “breach of impartiality”.

The ruling which annulled the conviction was issued in the final week of December and is considered by jurists as the “main acknowledgment of the former judge’s partiality” by the Supreme Court. “This is an essential part of the perfect storm. After the trial of the cases Palocci and Banestado, the Second Panel may have come to a position regarding Moro’s partiality, along with the Nunes Marques and Cármem Lúcia’s votes”, stated lawyer Marco Aurélio Carvalho, coordinator of Prerrogativas group. “Throughout five years, we have presented indisputable evidence of this total breach of impartiality. Although the partiality trial requires just an existing doubt, we are heading towards absolute sure”, adds Zanin Martins.

Those were not the former president’s only recent victories. A ruling issued by the 6th Federal Court of São Paulo archived an investigation filed against his son, Luís Cláudio Lula da Silva. It is the 7th proceeding in which the leftist ended up acquitted, or the inquiry was archived. All of the proceedings that had this outcome were analyzed far away from the “Republic of Curitiba”. According to Zanin, the most emblematic proceeding is the one known as “Quadrilhão do PT”. Following a decision of the 12th Federal Court judge, who concluded that the proceeding was an “attempt to criminalize politics”, the Prosecutor’s Office gave up filing an appeal. There are currently four proceedings against the former president. He was considered guilty in two of them: the triplex apartment case and the Atibaia farmhouse.

According to Marco Aurélio de Carvalho, not only Lula da Silva’s case is at stake in this habeas corpus trial, but whether the principle of partiality is valid or not.

“If Moro is not declared a partial judge, no judge in Brazil may be considered partial. A magistrate who authorized an illegal disclosure of a phone conversation between the president of the Republic and a politician, curtailed the demands of the defense team, wiretapped all the phone lines belonging to Lula da Silva’s law firm, among so many other things, is a suspect. If he is not declared partial following all the crimes I have mentioned here, it would be as the Supreme Court gave safe conduct to the magistrature”, says Carvalho.

The new year, evaluates Zanin, might undo the schemes within the proceedings against Lula da Silva. “This may be very important, so all the truth we have shown over more than five years is legally acknowledged”. It remains to be seen.